With the cancellation of the 2020 Houston Livestock Show and Rodeo, Austin Rodeo and numerous other livestock shows around the country, many 4-H and FFA students had their show year disappointedly cut short.

These cancellations resulted in the loss of hundreds of thousands of dollars in scholarships and invaluable experiences that these students had worked hard to achieve. To give these youth a hand up, Cavender’s held a contest in March to award over $40,000 in scholarships to deserving FFA and 4-H students.

The response was overwhelming, with hundreds of outstanding applications submitted. The decisions were not made easily due to the number of exceptional students whose hard work, dedication and passion shined through in every entry.

We are very proud to announce the 15 champions of our 2020 FFA and 4-H Scholarships.

After tragically losing her dad at a young age, Kallie Childress fell in love with 4-H after her first meeting. At a time when she couldn’t find her place among fellow classmates, Kallie found a passion for livestock and realized this was where she belonged. Fast forward 10 years, and she found herself on a journey fueled by her love for agriculture.

This year, Kallie was planning to show two barrows, Waylon and Charlie, both named after infamous country music stars. She had high expectations for these two at both the Houston and Austin livestock shows. Many hours went into the planning and preparing of these barrows and she was excited to show them off.

Kallie has held numerous leadership positions within 4-H throughout her upbringing including serving as a Texas 4-H Livestock Ambassador, President of District 1 4-H and the Texas 4-H Council. Her excellent leadership led her two hold FFA office titles in her chapter for the past two years. She credits FFA and 4-H for all these opportunities that have allowed her to overcome her fears and develop self-confidence.

Next year, Kallie will head to Texas Tech University. She will continue to use work ethic and independence to push toward her goals, traits that were instilled in her by her mom. She will enter her freshman semester with 42 dual credit hours completed and looks forward to using lessons learned in the show ring to in her college classes and future career. Despite the uncertainties in the road ahead, she knows that when life hands her lemons, she’ll continue to make lemonade.

A 10-year veteran in the show ring, agriculture and FFA played a big role in Kelton Marek’s life from an early age. As the son of two agriculture teachers, there was no question his love for the industry would lead him down a similar path.

This year, Kelton chose to show Yeli, a crossbred steer. Their story actually began last year at the Houston Livestock Show and Rodeo when Kelton purchased Yeli with a scramble certificate he had won. Although Yeli proved to be hard-headed and stubborn to halter break, Kelton knew he would be the perfect show steer. Their bond was not only special outside of the ring but shined even brighter inside the ring. Despite being tiny, Yeli dominated competition. Because he excelled throughout the year at various events leading up to Houston Rodeo, Kelton had high expectations and was excited to see what they could do at the prominent show that had brought them together.

Unfortunately, we will never know the outcome but Kelton feels grateful to have had the opportunity to work with Yeli. Throughout his life, he’s always believed that it was important to represent the organization and agriculture industry in a positive manner and that is something he’ll continue to carry with him throughout his life. Because of the life lessons he was taught in FFA, Kelton believes it prepared him to handle adversities, like the ones he has faced this year. These same lessons and characteristics will carry him as he begins his journey to become an ag teacher and give back to the students and organization that did so much for him. 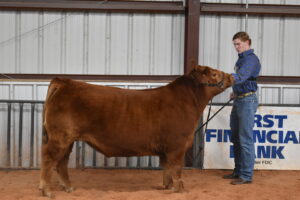 “Nothing is given to you in life.”  “Everything you get, you must work hard for. The harder you work, the more you’re rewarded.” These are the mantras that Jerrid Tennison has shaped his life around. Starting his day at 5:30 am and usually working until after dusk, Jerrid only knows hard work.

FFA and 4-H have provided Jerrid with lifelong lessons and friendships but the most important one for him is simple: dependability. Learning how to depend on others and also knowing how others depend on him goes far beyond the show ring. He has relied on others throughout his life to instill their knowledge and share expertise with him. He knows he would not be where he is today without the mentorship of those individuals and his ability to listen and retain those lessons.  He now looks to pay it forward by sharing knowledge with others who may depend on him and who may not have had his same opportunities.

In 2017, after losing his dad to cancer, Jerrid was approached by Brandon Horn, a local farmer, who encouraged him to return to FFA, 4-H and the show ring; things he had given up during his dad’s two-year cancer battle. The illness brought extra expenses that did not allow for extracurricular activities as expensive as livestock. Mr. Horn agreed to sell Jerrid a steer and gave him a job to work off the cost of the steer and feed.

Because Jerrid’s dad was a single father of two, Jerrid and his sister moved in with their grandparents who had promised their son that Jerrid would attend college. Jerrid spent every day with his steer, Kool-Aid, grooming, training and washing him on a daily basis. Over the course of almost a year, they created a special bond and “Coo-Coo,” as he was nicknamed, would even moo on-demand when Jerrid shouted his name. Jerrid was excited to show Kool-Aid at the Houston Rodeo.

Mr. Horn had made an agreement with Jerrid that his earnings from the show would go towards paying off the remaining balance of the steer and the rest would be put towards a college fund. Although Jerrid had won some previous scholarship money, he was confident that the 2020 show was going to be a big success. Despite the cancellation of the show, Jerrid knows the same hard work and determination that got him to this point will continue to fuel his motivation into college and beyond.

We also awarded 12 Champion scholarships ($2,500) to the following students:

Thank you to everyone who took the time to submit an entry. We are so proud of all of the FFA and 4-H students throughout the country who were impacted by the abrupt ending to their show season. Your dedication, hard work and tenacity does not go unnoticed. We know that although this wasn’t an ideal situation, you will come out stronger than ever. The future of the agriculture industry looks bright and we look forward to the next generation of leaders!

Essentials For The New Year