James R. Cavender technically graduated from Oklahoma A&M in 1953 with a Bachelor of Science in Animal Husbandry while in ROTC. With war tensions running high, he had to report immediately to the Air Force and could not walk the stage to receive his diploma. The university told him to come back any time to participate in the graduation ceremony. James’ son, Mike Cavender, says

“His mother always wanted him to be able to do it, but James being James, he was always too busy.”

A few years later, Oklahoma A&M’s name changed to Oklahoma State University, the name the university holds today. James paid $1.00 to have a diploma sent to him with the new name. He always said,

“that was the cheapest education I ever had.”

It took him some time, but this weekend, he will make good on the promise he made to his mother! Sixty-four years and a western wear chain with 80 stores across the country ~ James is finally making time to walk the stage. 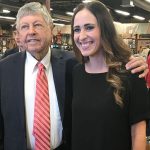